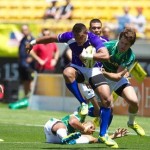 A host of players on the IRB Sevens circuit have donned Mizuno’s Morelia Pro boots in recent weeks, with almost all the Fijian side sporting the bold lime/blue version. A classic in Mizuno’s rugby boot range the Morelia is crafted from ultra-light Kangaroo leather with a variable-width lacing system ensuring ultimate comfort. An 8-stud configuration […] 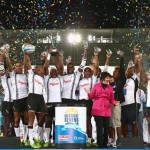 Not only did the Fijian Sevens team get their 2012/13 campaign off to the best possible start with victory at the Gold Coast tournament a fortnight ago, but they looked particularly in-sync doing it, with the bulk of the squad sporting the same bright green Mizuno boots. The Mizuno Morelia Neo is the Japanese companies’ […]

The Samoa national squads have a deal with Mizuno for kit. Thanks to this the Sevens squad in Scotland over the weekend of the IRB World Series 4/5 May 2012. Could be seen in a new colour range of the Mizuno Morelia Football Boots. These boots are not designed for rugby but ideal for the […]