England’s hottest new star, fly-half Owen Farrell, shone in England’s stunning annihilation of the World Champion All Blacks on the weekend, playing with composure and maturity as he guided his side to a famous victory.

Farrell’s striking looking Nike Tiempo Legend boots were on fine form as he knocked over the first 15 points of the match, playing an integral part in England’s effort as the home-side asserted their physical dominance, which in turn provided Farrell with penalty opportunities and the chance to nail a cleverly taken dropped goal.

The Tiempo Legend is one of the most technologically advanced boots on the market, with the soft kangaroo leather on the upper and a padded lining on the tongue ensuring it is incredibly comfortable, and a lightweight TPU outsole meaning stability and balance is a given. 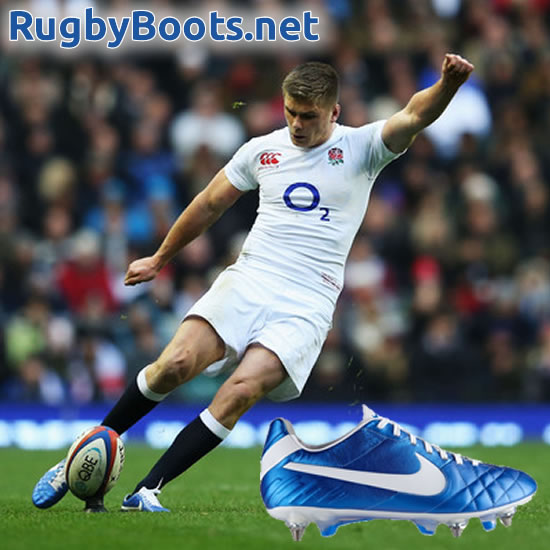 The assured performance by the young fly-half capped off a stellar year for Farrell, son of former League and Union great Andy Farrell, the current Assistant Coach of the English team. Starting out in the 13-man code, the young Farrell followed in his father’s footsteps, switching to Rugby Union when Andy signed for Saracens.

Making his debut for Saracens just 11 days after his 17th birthday, Owen became the youngest player to play professional rugby in England, going on to feature prominently in his side’s Aviva Premiership win in 2010/11, where he claimed 17 of their 22 points as they defeated the Leicester Tigers in the final.

Farrell made his debut for the national team in the 2012 Six Nations, and his compelling form at all levels of the game earned him a nomination for IRB Player of the Year, a huge honour for such a young players, considering he is joined by fellow nominees including Richie McCaw, Dan Carter and Freddie MIchalak.

Combining silky skills and a robust physical presence, Farrell is equally at home in the fly-half role or further out in the midfield, and this versatility means he will surely be a huge asset in a young England side which is showing incredible promise, and could well be timing their run to the 2015 World Cup to perfection.