The Incurza, the latest in adidas’ iconic series of Predator boots, made a huge impression this year, with both the black, blue and lime version and the silver, black and red colourway being worn by a plethora of the world’s leading players, and the 2013 version is sure to be just as popular. 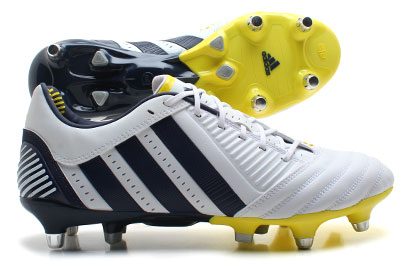 White, Navy and Yellow appears to be a recurrent theme with adidas for 2013, with the Incurza adopting this stylish, dynamic design. Developed with input from some of the world’s best kickers, including All Black legend Dan Carter, the Predator Incurza was created specifically for those who need to kick the ball, and is a favourite with halfbacks and flyhalfs. 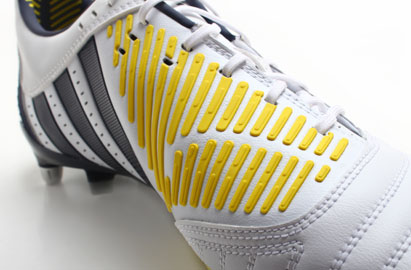 An adjustable, off-centre lacing system increases the surface area on the front of the boot, while two specific kicking zones, the ‘Sweet Spot’ and the ‘Precision Zone’ aid both goal-kickers and those kicking from hand, helping generate power, distance and accuracy.

A 3D Puff Print on the inside of the boot makes it easier to break the Incurza in, and also serves to lock the foot in place, enhancing stability and decreasing the risk of injury. The new Hybrid sole plate features a configuration of removable and moulded studs, making the Incurza a versatile boot which is perfect for explosive acceleration on a variety of natural surfaces.

The Sprintframe outsole is adidas’ secret weapon, allowing them to keep the weight of the boot to a bare minimum whilst creating a product which is robust and durable. The Incurza is of course compatible with adidas’ miCoach technology.