I recently received a pair of Kooga’s latest boots, the XTB LCST, and after casting my own eye over them I asked Luke Katene, a member of the Canterbury ITM CUP Rugby Squad which has won New Zealand’s National Provincial Championship for the last four years in a row, to try them out.

I’d got my hands on the ‘Classic’ version, which are predominantly black with orange highlights, although Kooga have released an alternate colourway in purple and bright green.

Luke was immediately impressed with the robust feel and comfortable nature of the boots, describing them as “unreal for running, jumping and maneuvering”.

He liked Kooga’s unique blend of moulded and removable studs on the sole, and felt they would be ideally suited to fast, hard pitches.

One of the key features of the XTB LCST is the ISO Quad grip on the inner sole, which enhanced the way the foot fitted the boot, and aided support when landing and jumping, as well as making it easier to break the boot in, with Luke making special mention of the fact that, unlike other boots which could take days to adjust to, these felt great after the first run. 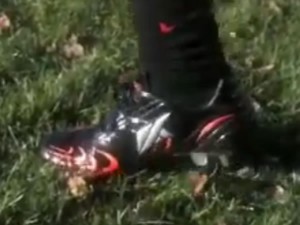 All in all, Luke was impressed with the comfort levels, weight, and ability to change direction provided by Kooga’s new boots.