It was a nail-biting final which see-sawed several times. England raced out to an early lead against a Kenyan side that had continually surprised over the weekend, having sensationally knocked hosts New Zealand out in the Semi-finals.

The Kenyans fought back from their poor start, and looked to have victory sealed, until the sinbinning of not one, but two players, allowed the English to sneak a last-gasp try and send the match in to extra-time, where Edgerley quickly sealed the victory. 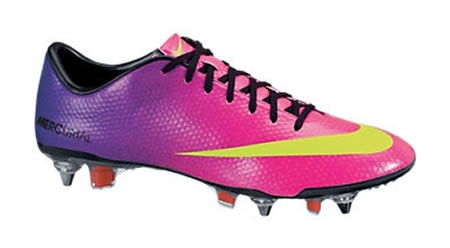 England’s hero on the day wore the Fireberry colourway of the new Nike boot which was designed with a focus on explosive acceleration and speed. A unique two-piece glass fibre sole-plate enhances flexibility and responsiveness, while the boots upper locks the foot down and creates stability, whilst allowing players to change direction dynamically and at pace.

Underneath the boot the innovative stud configuration which blends removable studs with highly responsive blades makes the Vapor Mercurial IXs suitable for use on a wide range of natural surfaces, while the textured finish on the kicking zones of the boots creates friction between boot and ball, increasing connection and aiding accuracy and power.